A lot of new writers have trouble with POV. Figuring out just what it is and how to use it well. It is a hard thing to grasp. If you are like me, you’ve read books with head-hopping. (Head-hopping is when you are in one character’s head/POV then the next paragraph you are in another character’s head/POV and then back again.) I often hear, “What’s the big deal if it is a good story? I can follow it and enjoy the story.” And this is true. The story can be fine, BUT . . .

When you head-hop the reader doesn’t get to lose herself in the story, forgetting she is sitting on her couch. One of the reasons we read fiction is to escape. One of the reasons we write fiction is to help readers grow closer to God. When you can connect with a reader emotionally through a character, you can help that reader learn and grow in a relatively painless way. Strong emotions help us change.

I had several fans write me about my first book, Newlywed Games, and how it convicted them about their own lying or half-truths. We all know that lying is wrong. It’s a commandment in the Bible. But when the lie helps someone else or our self and it isn’t really hurting anyone, what’s the big deal? We get numb to lies. People can tell us over and over not to lie to no avail, but when we get emotionally attached to a character and hurt with them, it changes us, the reader.

So when we can do all we can to get the reader to emotionally attach to the character, God can use that to change that person, to know Him better, and to draw closer to the Lord.

Head-hopping is only one POV problem. A distant POV is another. This is when you describe a scene or play out a scene as viewed but you the writer. It’s all surface stuff. You need to crawl inside the character’s skin and become them and show what they are feeling and thinking, and have them interact with the environment. A character must think, speak, feel, and act. The character must behave how the character would behave.

I have read numerous samples where an adult child (the POV character) thinks of their own parent by their first name. Unless it is a dysfunctional family, most people think of their parents as Mom and Dad or a variation of those. So when a character thinks of their parents by their first name or even worse as Mr. or Mrs., I am no longer attached to that character. Now if the family is really dysfunctional, then they might call a parent by a formal or first name, but you have to show that.

Also facial expressions can give away what someone might be thinking. In a movie, a character looks sincere and you are convinced they are a good person, but then when the other character isn’t looking, the camera shows the character’s expression change from sincere to wicked. And we, the audience, knows the truth, and we yell at the screen for the other character to “Lookout!”

So crawl inside one of your characters, I mean really get inside their head. Close your eyes and think about that character and what makes them tick. What were they doing before this scene began. What are their hopes and dreams? What do they want? Then read that character’s scene as though you are them. Be and actress/actor. Make sure everything in that scene is wholly from that character.
at April 24, 2008 No comments:

I was going to be a really good girl and get my blog posted yesterday on schedule, but the Internet, or the server, or the wireless thingy in the house was against me. They were probably all in cahoots with each other.

I thought by the time Thursday rolled around I’d know just the right writing topic to blog about. Well, my brain is a little low this morning.

I hear those snickers and giggles.

I think everyone of us has been at a point when they are at a loss for words for one reason or another. We like to refer to this as Writer’s Block. Mine often comes in the form of black fur, four legs, and purrs. She crawls on my lap and if I don’t give her enough attention, she will try to lay across one or both of my arms. If that doesn’t work, she stretches her paws across the keyboard, usually holding down the space bar or highlighting everything. It makes writing interesting.

What most people think of as Writer’s Block is when we don’t know what to write or what comes next in our story. If you are a serious plotter, then the second one probably never happens to you. Some times Writer’s Block happens because our brain is stuck in a rut and we need to blast it out of there and get on a new road, or at least a freshly paved one. Here are a couple of Writer’s Block sticks of TNT.

Idea #1: Free Writing – This sounds simple, but some times it is just what you need to unlock your creativity. Take a word, topic, or phrase and write for ten minutes on it without stopping to correct or edit. Let your mind take you wherever. There is no wrong writing in this exercise. You don’t even have to stay on topic. Maybe you start with the word pencil and end up on a snowy mountaintop. You can just write about that thing or incorporate it into a mini scene where that object is used.

You can get Free Writing words and topics in a variety of places. There are books on story starters, creativity, and such to help get you going. You can also create your own story jar. You take small household objects that will fit in a jar and save them. Items like a stubby pencil, broken crayon, paper clip, lip stick tube, key chain, key, small toys, bouncy ball, piece of duct tape, ribbon, a ring, bottle cap, etc. My jar is about 6 inches tall and about 3+ inches wide. When you want something to Free Write about, you take something out of the jar and start writing. Don’t think. Don’t plan. Just write.

Idea #2: People Watching – Go to the mall and watch people. Pick a person out and make up a story, history, or background for them. Let your mind go free.

Idea #3: Story Blocks – This is when you come to a point in your work-in-progress (wip), and don’t know where to go or how to get your character out of the corner they have gotten themselves into. Brainstorming with others is usually a good solution, but we don’t always have someone we can brainstorm with or we don’t want to bother them as often as we might need them. I have found it helpful to put my mind to work on the problem as I lay down to sleep. I mull it over and run through several scenarios and usually the solution will come to me before I fall asleep or my subconscious works on it while I sleep.

I have jumped into this pool of blogging, and I know there are those of you who know me who are thinking, “It’s about time!” Well now that I’m here, I need to get swimming. I will be starting out slowly with treading water and a dog paddle now and then.

I plan to blog on Mondays and Thursdays. Monday Madness will be anything that strikes my fancy from serious to funny. Thursday I will get down to business and blog on something writing related.

I musts confess that this blogging world scares me, because I am not tech-savvy. I used to think I was dumb because this internet and computer stuff just isn’t logical to me. I know a lot of you are thinking, “What’s her problem? It’s not that hard.” And I would agree with you, but it is hard for me.

But I had a “Tiffany-epiphany” and realized that I am not dumb when it comes to computer things. Computers are designed for normal thinking people. And let’s face it, when have I ever been normal? I have a learning disability, dyslexia. Dyslexia is a processing error in the brain, so my brain does not process this computer stuff (and other stuff) like the rest of you. Now if they would only design a dyslexic computer, I’d be all set. And it would have a spell checker with all the words misspelled by dyslexics and poor spellers so the stupid tool can figure out what I’m trying to spell.

This is enough dog paddling for one day. I think it’s time to climb into the Jacuzzi. (Not that I have a real Jacuzzi, that is a metaphorical Jacuzzi, but I am an author and have a good imagination.) I can feel the warmth now.
at April 14, 2008 1 comment:

Technology scares me. It is this new and invisible thing. I'm a visual person, so it is hard to wrap my head around something I can't see. I know cyber space is out there, but it's not a tangible thing I can touch. So I must question if it is real. Logically it makes sense, but I have no clue how it works. And I think it is best if we keep it that way.

I'm not anti-technology, it just has a tendency not to work right for me. But I decided it was time to dive in head first and hope that my seat cushion will sustain me as a floatation device.

With the help and encouragement of a few friends, I have been navagating these technology waters.

Tuesday Tidbits: OFF TO SEE THE WIZARD

MGM [Public domain] As for you, the anointing you received from him remains in you, and you do not need anyone to teach you. But as h... 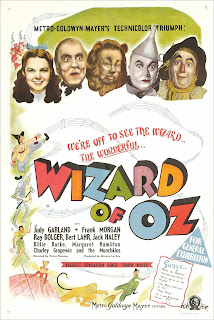