In the fall, I proposed a story idea for a publisher’s WWII series written by different authors. The overarching theme is unsung female contributions to the war effort, like Rosy the riveter. I chose to have my heroine be a WASP (Women Airforce Service Pilots). I figured the publisher would have already had an author with a WASP, so I was quite surprised when mine was contracted. I was in the midst of working on the next book in my Quilting Circle series when I came up with the idea. The first name that popped into my head—as I was hastily putting together a query paragraph to see the publisher was interested—and fit the time period was Peggy.

Here is the imagine of “Peggy” I’m using while I write. This is Betty Wall, an actual WASP. 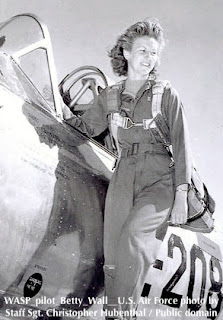 I needed to give my heroine a full name. I knew Peggy was short for Margaret, right? Yep, Margaret. Not sure how one gets Peggy from Margaret. This reminded me of various other nicknames that are confusing or have little in common with their formal name.

Did you know not only is Peggy a nickname for Margaret, but Meg, Megan, Mary, and Daisy are as well. Daisy? Yep, the French word for daisy is Marguerite.

Here are some other confusing nicknames, at least to me. I know they have been around almost as long as the formal names, but how they got from the formal to the nickname is a bit of a head scratcher. I know they probably made sense at the time, but that they survived and spread across generations is interesting.

~Jack is the nickname for John. Generally, I think of a nickname as being shorter than the formal name. They both start with a “J” and have four letters. Why did “John” need a nickname?

~Dick is the nickname for Richard. I never understood this one.

~Bill for William. Like the previous one, I don’t understand the need to change the first letter. I like Will as the nickname.

~Libby for Isabel. Never would have guessed.

~Ned or Ted for Edward, Edgar, Edmund, or Edwin. Not sure why “Ed” wasn’t good enough.

~Polly for Mary. My brain can’t make this leap. My name is Mary, and I never heard of this one before researching for this post.

~Nellie for Helen. If I spell Helen backwards Neleh, it’s close to Nellie.

~Chuck for Charles. Scratching my head.

~Sukie, Suchie, or Suchy for Susan, Susanna, or Susannah. Hm?

~Nancy for Ann. I really don’t get this one. Nancy is longer and has more syllables. Upon further research, Nancy isn’t technically a “nickname” for Ann but rather a “nicholasname”. Personally, I think nickname works for both long and short.

I know that many of these nicknames were because a small child couldn’t pronounce the name, and the adult thought it was cute. So, rather than correcting the little one, they mimicked him/her.

Does your name have a nickname that doesn’t resemble the formal version?

Enjoy four historical romances that celebrate the arts of sewing and quilting. When four women put needle and thread to fabric, will their talents lead to love?

Bygones by Mary Davis
Texas, 1884
Drawn to the new orphan boy in town, Tilly Rockford soon became the unfortunate victim of a lot of Orion Dunbar’s mischievous deeds in school. Can Tilly figure out how to truly forgive the one who made her childhood unbearable? Now she doesn’t even know she holds his heart. Can this deviant orphan-train boy turned man make up for the misdeeds of his youth and win Tilly’s heart before another man steals her away?