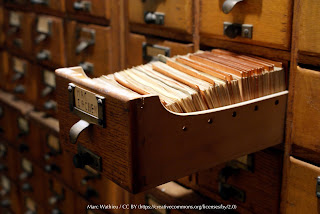 What do you get when you put an information activist, a Nobel Peace Prize winner, and 15 million 3x5 index cards together?

Before the Internet and before the World Wide Web there was a central depository of world knowledge known as the Mundaneum.

As long as people have been interested in information, there have been those who have tried to collect it, either hoarding it for themselves or trying to make one central place for all people to search information, rather than it being scattered all over the globe.

Around 300 BC in Alexandria, Egypt a great repository of knowledge was collected, over 700,000 papyrus scrolls. Most of this knowledge was lost in various fires. Between 1751 and 1772, the universal Encyclopédie was published by Denis Diderot and Jean Le Rond d’Alembert in a twenty-eight volume set with yearly supplementary material for its 4,000 subscribers. Apparently the first set of encyclopedias. These are only two of the many attempts to organize knowledge from around the world.

In 1895, Belgian lawyer Paul Otlet (information activist) and Henri La Fontaine (Nobel Peace Prize winner) began collecting data on index cards. By the end of that year, they had amassed more than 400,000 entries.

In 1910, they established the Mundaneum project. The idea was to collect the entirety of human knowledge and put it on searchable 3x5-inch cards. 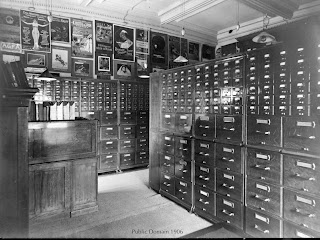 This ambitious undertaking was to be the centerpiece of a “global city” in Belgium to be designed by architect Le Corbusier. This city would be a hub of knowledge to inspire the world with its universities, libraries, and museums.

To organize the huge amount of information into a coherent treasury of global history and knowledge, Otlet developed the Universal Decimal Classification (UDC). A daunting task to say the least with all those bits of paper. The UDC had nine categories of classification; “Philosophy & Psychology,” “Religion & Theology,” “Social Sciences,” “Communication,” “Mathematics & Natural Sciences,” “Applied Sciences, Medicine, & Technology,” “The Arts, Recreation, Entertainment, & Sports,” “Language, Linguistics, & Literature,” and “Geography, Biography, & History,” with a tenth unnamed category for expansion. Then they were further broken down into 70,000 subdivisions. 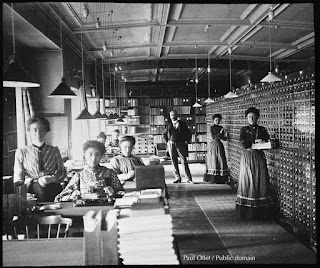 The staff grew over the next few decades. They created and catalogued over 15 million cards, which summarized books and periodicals. After creating this repository of knowledge, Otlet offered a research service—for a fee, of course. From around the world, 1,500 queries came each year by mail and telegram. 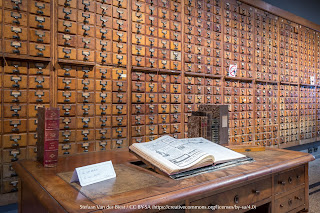 By 1934, the paper-based system became cumbersome. Otlet planned to move the whole operation to another system he called a mechanical data cache accessible via a global network of what he termed “electric telescopes.” Devoting his professional life to assembling, logging, categorizing, and circulating information, Otlet envisioned a world where knowledge would be interlinked and available to everyone around the globe. (Sounds a lot like the Internet.) He annotated relationships between one document and another. He envisioned a machine that people could access remotely that would transport an image of a card through telephone lines. (Can you say “dial-up” Internet service?) In his time, there was no word to describe this inter-connecting of documents so he invented the term “links.” (We still use that today.) 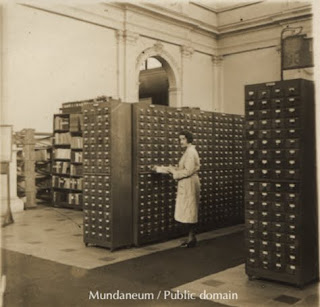 This man was trying to create the Internet before all the technology for it was developed. Definitely an idea before its time. Unfortunately, the Belgium government didn’t take to his vision, with priorities elsewhere because of WWII looming on the horizon.

After years of financial difficulties, the Mundaneum moved to a smaller site and eventually ceased operating. When the Nazis invaded Belgium, soldiers destroyed thousands of boxes filled with precious, information bearing cards.

By the time Otlet died in 1944, his Mundaneum and global city were mere memories. Though he didn’t live long enough to see the birth of the Internet, he is regarded as one of the forefathers of information science. His vision of a searchable network of documents and information was an early version of the World Wide Web. 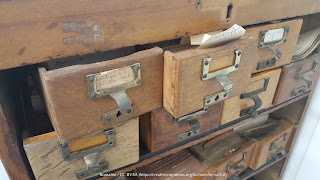 What remains of the Mundaneum—planning documents, drawers of original 3x5 index cards, books, and posters—are housed and on display at the Musée Mundaneum in Mons. 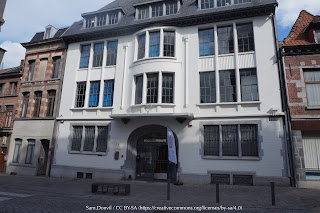 Geneviève Marseille has one purpose in coming to Kamola—stopping her brother from digging up the past. Deputy Montana has lived a simple life. But when a fancy French lady steps off the train and into his arms, his modest existence might not be enough anymore. A nemesis from Aunt Henny past arrives in town threatening her with jail. Will she flee as she’d done all those years ago, or stand her ground in the town she’s made her home? When secrets come out, will the lives of Geneviève, Montana, and Aunt Henny ever be the same?

#TheDamselsIntent #HistoricalRomance #FreeKU #KU #ChristianRomance
Can Nicole learn to be enough of a lady to snag the handsome rancher?
Nicole Waterby heads down the mountain to fetch herself a husband, not realizing women don’t wear trousers or carry a gun. She has a lot to learn. Rancher Shane Keegan has drifted from one location to another to find a place to belong. When Nicole crosses his path, he wonders if he can have love, but he soon realizes she’s destined for someone better than a saddle tramp. Will love stand a chance while both Nicole and Shane try to be people they’re not?

MARY DAVIS is a bestselling, award-winning novelist of over two dozen titles in both historical and contemporary themes. Her latest release is THE DAMSEL’S INTENT (The Quilting Circle Book 3, Salah Award Winner). The Quilting Circle Book 4, THE DÉBUTANTE'S SECRET, will release August of 2021. Some of her other recent titles include; "Holly and Ivy" in A Bouquet of Brides Collection, Courting Her Amish Heart, The Widow’s Plight, Courting Her Secret Heart , “Zola’s Cross-Country Adventure” in The MISSAdventure Brides Collection , and Courting Her Prodigal Heart . 2019 titles include The Daughter's Predicament and "Bygones" in Thimbles and Threads. She is a member of ACFW and active in critique groups.
Mary lives in the Pacific Northwest with her husband of over thirty-six years and one cat. She has three adult children and three incredibly adorable grandchildren. Find her online at: