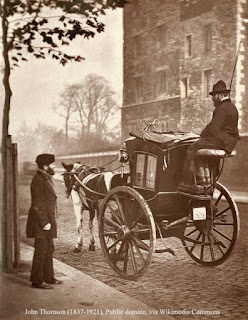 In York, England, architect Joseph A. Hansom designed the Hansom Safety Cab and patented it in 1834. The cab he created was a light, fast two-wheeled vehicle pulled by a single horse and designed to ferry one or two passengers—three if they squished together. It was also known as the two-wheeled “safety cab” because the low center of gravity made it less likely to tip over on tight turns anti was maneuverable through city traffic. 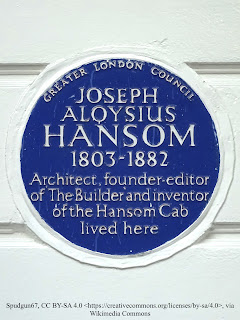 The hansom cab replaced the larger four-wheeled hackney for hired transportation for one or two people. It also afforded a better view than a side window of a larger carriage as the front was open. John Chapman modified the design, as well as others, to make it more practical but kept the Hansom name.

A typical charge could be 30 cents for one person (40 cents for two) up to a mile and 75 cents for one or two people for up to an hour. Though most of the Hansom Cabs were for hire, many were also in the private service of some wealthy individuals. 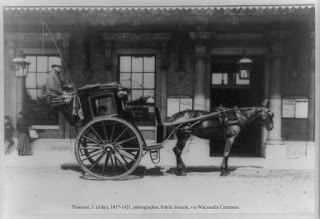 The driver sat on a sprung seat at the back of the vehicle. A trapdoor in the rear of the roof allowed passengers to communicate a destination to the driver as well as pass the fare money through the hatch to him. Once paid, the driver would operate a level to release the doors so the passengers could exit.

Low, folding wooden doors could enclose the passengers’ feet and legs to protect them from weather and splashing mud. The curved front fender protected against rocks being kicked up by horse’s hooves. Later models included an up-and-over glass window above the doors to complete the enclosure. I have wondered from time to time where the term taxicab came from. Cab was short for cabriolet, the style of carriage used for hire. Taxi is short for taximeter, the devices created to measure the distance traveled. Put them together, and you get taxicab.

In The Débutante’s Secret, that releases in a few days, Geneviève Marseille seeks out a Hansom Cab to hire, but they haven’t made their way to the college town. However, Kamola is well on its way to having an organized cab service with the handful of industrious fellows who linger with their buggies near places (the college and hotels) they are likely to find fares at.